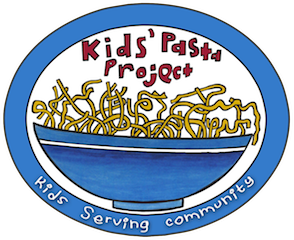 Kids’ Pasta Project engages kids in serving the community by implementing fundraising dinners for community organizations. The dinners highlight local food as much as possible and are prepared and served by the volunteers. We consider KPP a creative endeavor because of the creativity involved in developing the dinner menus and making the dining experiences unique. Beginning as early as age seven, the volunteers learn more than restaurant skills and the value of service to community; as they engage increasingly in managing the dinners, they learn about teamwork, creative problem-solving, resourcefulness and leadership and also gain administrative skills. Dinners are generally held on Mondays at Edesia Kitchen or Delicious Orchards in the spring and fall seasons, and during the summers, the KPP crew often serves at the venues of the organizations being supported.